During the summer, when a body is tired from a full day's activities, head to the O.C. Tanner Amphitheater to witness national and regional acts perform in the outdoor venue, tucked into Zion Canyon. Read More

As concert-goers sit in the 2,000 seat open-air amphitheater, it can be difficult to figure out what is more impressive: the performer on stage, the sandstone cliffs surrounding it, or the fire-red sunset that stains the sky.

The organizers aren't afraid to stretch boundaries or include some outside acts, so the Tanner Amphitheater hosts an eclectic crowd including blues, classical, country, folk, rock, bluegrass, and more.

The regular summer program is called the Twilight Concert Series, in reference to the late summer sun that provides light for the theater. Often times there are pre-concert events, such as a chuck wagon feast or guest lecture, so be sure to check the schedule.

The venue is located just outside of Springdale, nestled in the cliffs of Zion Canyon.

To get there from St. George, head north on I-15 until the Hurricane Exit #16, following state highway 9 all the way into Springdale. If coming from Ceder City or the north, take the Toquerville Exit #27 to UT-17, which meets with UT-9 heading to Springdale.

Head through most of the town, taking a left onto Lion Blvd, which leads directly up to the amphitheater.

The Twilight Concert Series is primarily during the summer, with an occasional one-off concert out of season. See the Event Schedule.

All regular season shows start at 8pm, and seats are first-come, first-served, so arrive early to get one of the 900 seats with backs.

Tanner Auditorium is owned by the Dixie State College in St. George, who built the amphitheater in 1976. 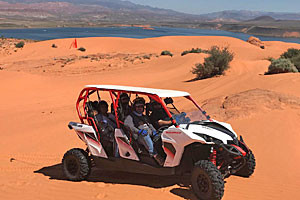